Happy Saturday...Happy Summer!
Yesterday afternoon I dropped off ALL my boys at the airport and then, for some reason, found myself and my LNS - Needle in a Haystack. As soon as the testosterone was out of my automobile, my car had a mind of its own and headed right for the needlework shop. Fancy how that happens :)

It was fun crusin' through all the fabrics and floss, patterns and accessories. I haven't visited NIAH in quite a long time. And, as it happens so often, a pattern...some fabric...and a little bit of floss jumped into the basket and gave my credit card a little work out. Here is the new stash I got and the new project that I decided to take on:
I have been seeing this SamSarah series on the SamSarah Facebook page as well as on a couple of blogs. I love the colors and the flowers. Unfortunately, NIAH only had the 1st chapter and a few of the floss colors. I did, as soon as I got back home, order the remaining Chapters (note: there are 6 chapters to this series; 1-4 have been published, 5 & 6 will be out later this year) and the missing Crescent Colours from www.123stitch.com.

In addition to this project, I have also received the first part of the newest LHN Mystery Series called "Song of the Seasons":
So now my "to do stitch" list has increased...but with the boys out of town and only the stores to take care of, I have been able to sit and stitch. Last night I picked up "Sampler Months" and started on the border of February... 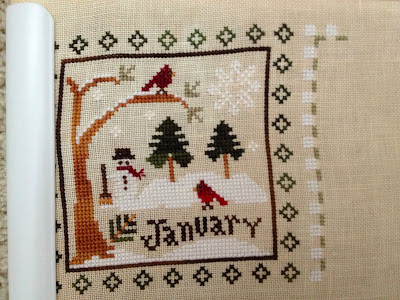 You can see that I have basically finished January. The February border is the white squares and medium green (dashes). It would be cool if I could finish the border tonight.

Well, just heard from ALL my boys. Matthew (the youngest) will be dropped off at Colorado College where he will be participating in the 2013 Western Regional Hockey showcase. He will be assigned a team and a roommate; from today until Thursday he will be rooming with another hockey player in a dorm room. He will be skating 2x a day - a morning practice and an afternoon game, as well as doing other team-type of activities. It is a really neat opportunity for him. While he is there, I am not sure what DH and Robert (older son) will be doing. They did plan to drive to Southern Colorado to do a little fishing and hiking, but the place that they had reservations is in the middle of some wildfires and has been evacuated. So, they might end up hanging around Colorado Springs the entire time. As long as they are safe!

Well, time to take off and get in some X's. Take care and remember...

Labels: Hockey, In My Garden, Sampler Months, Song of the Seasons

Catching up time...a trip to Iowa with Robert and Matthew's graduation from Middle School

I know...it has been quite a while since I have written. It has been a very busy few weeks. Last time I posted, I was getting ready to leave for Dubuque, Iowa with my older son, Robert. He was invited to attend the USHL main camp for the junior hockey team called the Dubuque Fighting Saints. On the evening of June 4, Robert and took a red-eye from San Francisco to Dubuque, Iowa - departing at 11:54pm and landing in Dubuque at 10am the next day (note: Iowa is 2 hours later than California).

Upon arrival at the little, teeny, tiny airport, we collected our luggage, got our rental car and proceeded right to the hotel to check in and go to bed for awhile. But only a while mind you because Robert needed to get a bite to eat and then go to the hockey rink to participate in an optional skate lead by the coach of the Fighting Saints. The next couple of days, Robert played 4 hockey games in front of the coaching staff and evaluators for the Fighting Saints. There were a total of 160 players there "trying out" for spots on the USHL team. Unfortunately, Robert didn't make the All-Star team, but he did have a good showing at the camp. 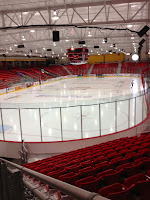 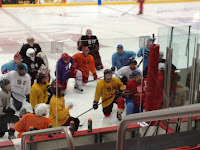 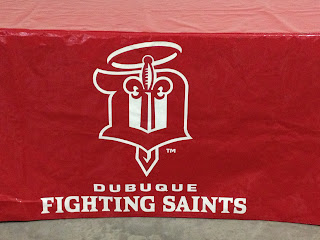 The weekend was filled with lots of hockey, lots of eating and lots of sleeping...the typical hockey weekend :) However, many times while Robert was napping, I took that opportunity to walk around downtown Dubuque.

The downtown area had some wonderful houses to look at: 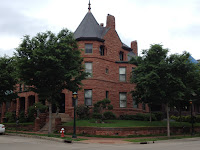 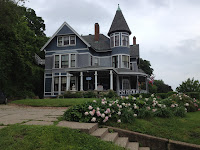 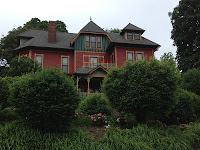 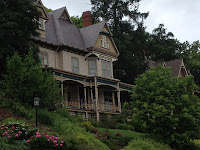 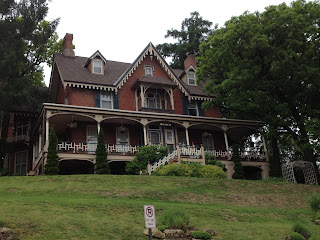 There were also some really neat buildings: 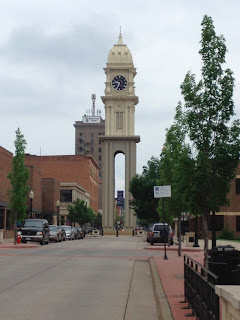 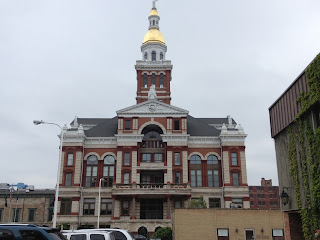 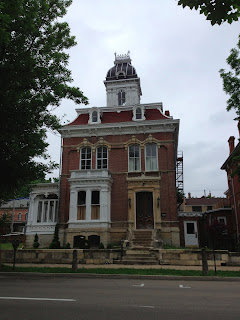 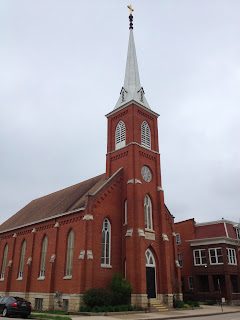 In addition to buildings and houses, there were these turtles around the downtown area... 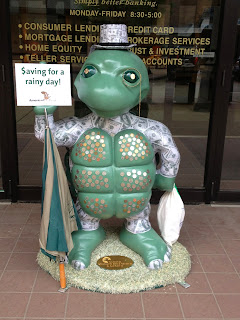 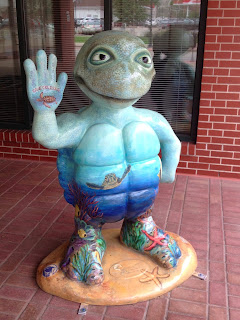 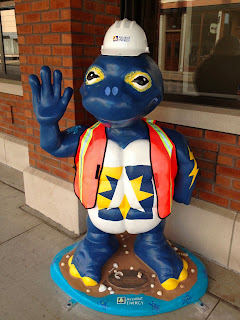 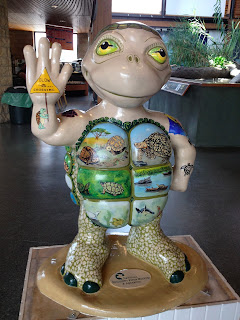 The turtles were part of a fund raising project for the National Mississippi Museum and Aquarium that was located a few blocks from our hotel...right on the Mississippi River. They just opened up a turtle exhibit. On the last day of our trip, when Robert was done with the hockey camp, he and I decided to go to the Aquarium and take a look at the turtles... 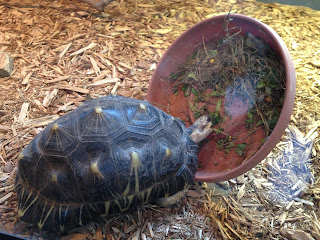 as well as check out the museum...
It was a great weekend! I had a lot of fun "hanging out" with my older son. It hit me, as I was with him, that times like this are priceless for in a little over a year he will be going away to college or playing for a jr hockey team. Hard to believe.

And speaking of time "marching on"...my younger son, Matthew, was just "promoted" from middle school and will be attending high school next year. Last week was the last week of school, which ended with the promotion ceremony. My parents were visiting from Minnesota and were able to see Matthew receive his certificate of completion from middle school and go out to dinner to celebrate.

Well, with all the activities going on, I really haven't found much time to sit my duff down and stitch. Hopefully the needle will soon find its way to my hand and I will find time to put some X's in The Monthly Sampler!

Thanks for dropping by! Until next time...

And Monday arrives, yet again - but with a little show & tell for you!

Well, happy Monday! While the weekend was somewhat busy with one hockey related activity and a little business activity, I did find time to sit my behind down on the couch and put in some "X's" in January of the Monthly Sampler project I am working on. I am just about finished with this month - just need to stitch the work "January" between the snow banks and add a little light green confetti stitching to the borders.
I am itching to start "February"...so I don't know if I have the patience to do the confetti stitching...maybe I will do that after "February" is complete...and before I move onto "March/April". Hmmm.

This is the perfect project to keep in my travelling bag (everyone always wants to know why I carry such a large bag and/or backpack...answer: "I am always ready to jump on a plane for hockey travel or just ready to sit at the hockey rink") for it consist of several small samplers, which are typically fun to stitch and quick.

Speaking of travelling...I will be taking the red-eye tomorrow evening with Robert, my older son. He received an invite to the main/tryout camp of the USHL Jr Team - Dubuque Fighting Saints. We will be taking the 11:45pm flight from here Tuesday evening and landing in Dubuque, Iowa at 9am Wednesday morning. Anyone know of a stitching store in Dubuque? :)

This is an exciting step for Robert, even though it doesn't come at a great time...he will be missing 3 days of school during the week right before finals. Both my boys don't get out of school until June 13/14. For Matthew (younger son),  he won't have much instruction or finals these last weeks, for as an 8th grader much of the time will be spent celebrating the end of middle school...however, Robert will be missing some final instructions while in Iowa before his finals next Tuesday-Thursday. Oh, well, his teachers have been very supportive of his hockey activities and have helped to make sure that he gets the information needed and time to make up the work he misses. So all is good.

Hope all is well and I thank you for visiting today. Take care and remember...