Wow! It has been a long time since my last post, so I have some catching up to do!

The last post was right as I was getting ready to leave for Hilton Head Island, SC to visit my grandmother. I am soooooooo glad that I went! It was so hard to see my grandmother post-stroke...yet, she didn't look like what I had prepared myself for. I guess we always prepare ourselves for the worst. My father (who lives in Minnesota and was still in SC visiting) picked me up from the airport and took be to the rehab hospital where my g'ma was staying (my mother was waiting with my g'ma in the hospital - my g'ma is my mother's mother). I entered g'ma's room and she took my hand in her left, held it to her face and cried..."oh, Lisa." She squeezed my hand while she cried and cried and cried. Not normally a crier, it was hard to see my grandmother show this emotion. But my hearts swelled up and I squeezed her hand, laid my head on her chest...kissed her...talked to her and so on. After a few minutes, the tears did stop flowing as I began to catch her up on all the stuff going on in my household. Within a few more minutes, I had her laughing as I told her about my boys and all there nonsense. When it was time to leave that evening, again she took my hand in her "good" left hand and squeezed, bringing it up to her face as she cried. She looked into my eyes and said, "Lisa, my first, you are here." I responded..."yes grandma, I am here. I love you!" Then with a kiss to her cheek, I said, "you get some rest. I will be back in the morning. Good night." and I left the rehab hospital with my mother and father.

I stayed Thursday, March 1 through Sunday, March 4. My father left on Friday, so the rest of the weekend I not only had time with my grandmother but quality time with my mother, which I haven't had in a very long time. Due to my g'ma having therapy from 9am-3pm, we weren't allowed to visit until the late afternoon so I fell into my mother's routine of getting our exercise completed in the morning, a late breakfast and then the drive to the hospital. My mother and I took some nice long walks on the beach as well as around my grandmother's neighborhood (we stayed at my grandma's house). My mother was able to share with me her thoughts and feelings as she was dealing with seeing her mother go from a independent person to one who now needed to depend on others. The hardest thing for all of us to deal with isn't really the fact that grandma's right arm is paralyzed or she is having trouble moving her right leg/foot without help...it is the fact that she lost control of her speech. My 93 year old grandmother's brain is working great and she has some wonderful things to say...but the stroke affected her speech, which...for the lack of a better word...SUCKS!

Anyway, I left Sunday 3/4 in the afternoon. Upon saying good-bye to my grandmother, through her tears she was able to get out, "Thank you for coming. I appreciate it. I love you." Again, I am so glad that I got out there and visited. I hope to get out there again in the near future.

Just a quick update. Since I left Hilton Head, a bed opened up in a beautiful skilled nursing facility which is just a few miles away from her neighborhood. Grandma's crying and sadness lessened with this move according to my mother. Grandma will continue to have physical and speech therapy, but is in a very nice and social atmosphere...and closer to where her friends live. My mother is going back home to Minnesota today and my 2 uncles (her brothers) will be arriving in Hilton Head on Friday. So there will be a continuous presents of family right now.

Speaking of Uncles...one of the uncles (my mother's younger brother) came out to California last weekend. He stayed at my house for a few days prior to going into San Fran for a business conference. It was great to have him here! DH and I were able to take some time off from the store on Saturday...and the boys didn't have any hockey...so we drove out to Half Moon Bay and had a great day.

After a meal at Sam's Chowder House, we hiked all over the rocky shore of the Pacific Ocean as the tide was going out.
We must have walked around that shoreline for over 4 hours for the tide started to come in around 4:30pm. So we decided it was time to go on home. Sunday morning, my uncle got a taste of what it is like to work in *The Store*. He went with me to prep fruit and make an early morning arrangement for a customer who needed to pick it up at 9am, which is an hour before we typically open on a normal Sunday. Uncle Doug learned to skewer strawberries, as well as dip them in chocolate. He was a fast learner, but felt the need to taste a few chocolate dipped fruits before I could put them on the arrangement...chocolate dipped strawberries, chocolate dipped bananas and apples. Nice Sunday breakfast, I guess. Once the customer picked up her arrangement, my Uncle and I went for coffee and had some time to visit...something that we haven't done in a long time!

Well, inbetween all this travelling and visiting I have managed to put a few X's into Family Sampler and I even have a photo to prove this. You will have to forgive me though, it is a phone photo as my camera really doesn't want to work...and I didn't take time to take the sampler off the hoop. But, at least I get to post a picture, right? 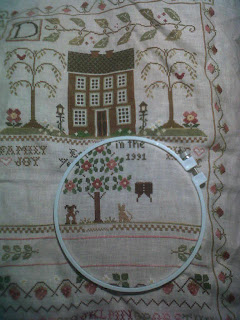 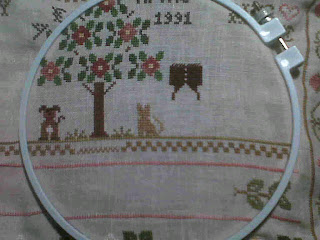 Since the last photo posting of my Family Sampler, I have added:
And there you have it...an update on my life as well as...finally...a stitching up date! With our 21st Wedding Anniversary coming up next month, I would love to finish Family Sampler! It was my desire to have it completed last year for our 20th Anniversary...but maybe I can get it done this year? Maybe.

The time to relax is when you don't have time for it.
~ Sydney J. Harris
I guess you could say the same for just about anything...

...because time Marches on and you might regret missing out
Since returning home from Quebec, it seems like I just haven't taken the time to get much done except work at our store and run the boys to hockey (yes, it is still going on). And, in addition to being busy, I have been fighting a very bad cold...which I finally took time out of my day on Tuesday and went to the doctor. I got some antibiotics and feel much better now, more human and more like myself!

But between not feeling well and going-going-going...I have found it more pleasant to sleep in thus throwing my morning exercise routine out the window. But it is time to get back on to the saddle (the saddle of my stationary bike and maybe even into the tennis shoes of my running). When I don't take the time for this activity, I don't feel 100%...and if I don't find the time to plop my big @$% on the stationary bike, I don't get to update my blog or catch up on everyone elses (for I blog while spinning...a little multitasking goes a long way!). No Spin...No Posting...Not a Happy Camper.

I have, believe it or not, taken out Family Sampler last week and worked on it. I am working on the middle section where the family is stitched. So far I have a dog and a cat stitched and am working on the husband/dad figure. I will try and get a photo of it up soon. Nice to have made time to take this out and reunite my hand with needle and thread!

Well, I am going out of town again. Leaving this morning for South Carolina. Right before I left for Quebec, I found out that my 93 year old grandmother suffered something like a stroke - her best friend drove to her house and found her laying in the middle of the TV room unconscious. Well, it has been several weeks since that occurred and my grandmother is in a rehab facility relearning how to speak, eat with her left hand and walk with the help of a walker. Her right side has been somewhat paralyzed and the event also affected her speech. She is doing fairly well at this time, but I guess one has to consider her age. When the event occurred, my uncle who lives in NC drove down to be with her and to make sure that she was getting good care. Being in the medical field, he was able to understand exactly what happened to her and relayed the information back to family and friends of my grandmother through daily emails. Since his departure, my parents have travelled from MN to SC and are there right now.

With the Quebec hockey tournament and Valentine's day behind me and a strong gut feeling to get to SC to see grandma, I purchased a ticket last weekend and will be flying out there this morning. It will be wonderful to see her and be with my parents, too.  I have been wanting to get out to visit her and wanting to take the boys out there...but there never seemed time to do it. Well, the boys might not be going with me this weekend, but I am grateful to be getting there myself! And I am glad that I didn't wait any longer to see grandma.

While I will be taking my iPad with me, I am not sure that I will have internet connection...so I will be absent another period of time. But please be patient with me!!!

Thank you for stopping by and remember...